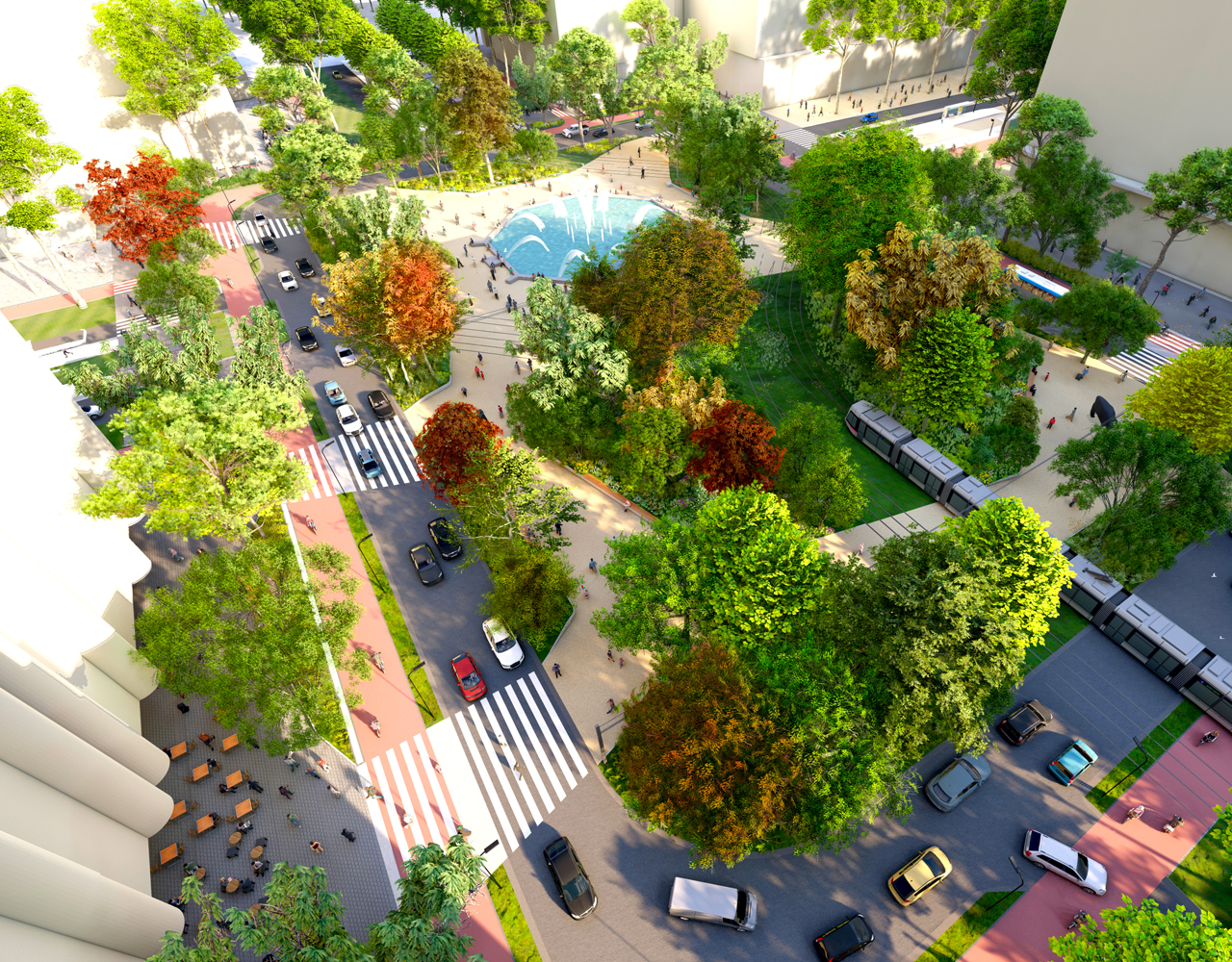 
Hofplein as a vibrant central green area surrounded by buildings. This vision emerges from the 'Sense of Place' team that is eager to tackle the Willem de Kooningplein. The shop plinth behind the three statues should come to life "like a boiling Feijenoord stadium". Fortunately, the municipality is transforming the square into a green oasis.

The sculptures of the Dutch / American artist Willem de Kooning stand neglected on three lifted lawns. In the hustle and bustle of the Rotterdam Central District (RCD) this is an island of stillness, almost dead. Behind the three objects the two plinths do not blend together and offer anything more lively than a brewery.

To find out how value can be added to this part of the outdoor space in the RCD and the real estate here, the RCD Association chose the retail plinth behind the three statues as a pilot project. The area was given the working name “Willem de Kooning square”. The Association asked Stipo, KuiperCompagnons and Stad2 to make proposals for improvement of the plinths in the Weenaflat and the Weenahuis. “Despite the diverse functionality of the area in terms of offices, service providers, catering and culture, the residential quality of the street pulls RCD back, ”states architect Silvian van Tuyl. He is a Program Director of Residential Building and Transformation within KuiperCompagnons. “There is almost no reason to be here during the day, walking around. In the evenings it feels especially like one of the "cold spots" as Delftsestraat feels somewhat unsafe because of the dense plinths, grandiose scale of the buildings and limited walking curents."


Van Tuyl's argument is easy to visually confirm and feel near Willem de Kooning’s three statues. The plinths of the Weenaflat and Weenahuis, lying behind the sculptures, are poorly exploited. There is a vacant spot there; the features out there add almost no value to the (innovative) qualities of the RCD area. The outdoor space by the two buildings functions poorly, says (former) Stipo researcher Jeroen Laven. “The Willem de Kooningplein in front of the Weenaflat is an attractive space in itself, known worldwide for its artworks and greenery. However, the square has barely any visitors, partly because of the unfortunate cross-fertilization of the happenings inside and outside, but also because of the limited capacity of pedestrian flows along the Weena.”

The assignment for the three bureaus was to come up with the plans for the redevelopment of the (empty) shops. They must be scaled up to fit the level of the RCD. "The result can then become the two starting links of a chain of buildings throughout the area, "Silvian van Tuyl continues. “A lot of plinths need to be paid attention to throughout the RCD area. Reasonable yet limited technical adjustments and a clear construction budget are enough to improve the plinths. They can become a kind of a "stand". The Hofplein then can become a central spot, surrounded by the buildings with their plinths and terraces. However, those stands are now empty, because the plinth is entirely disconnected from the central spot. You can see that with the arrival of café Fontein, its terrace on Hofplein 19, already functions a bit of a stand. ”


Walk through Delftsestraat in the evening. It doesn't really feel like you are walking through an area swarmed by large international corporations, cunning start-ups and scale-ups, and prominent service providers. This street, one of the entrances to the RCD, has many "cold rear ends". Mere blank walls or shop windows covered by shutters. “Tackling the shop issue on Weenaflat is precisely what must be done to solve the problem. These shops run through Weenaflat to Delftsestraat,” says architect Van Tuyl. "By working on the facades on Delftsestraat, you simultaneously improve the building fronts there. There is then enthusiasm to walk through it. It even has the potential to become a truly intimate street. ”

The project is an exercise to get (two) investors, municipality and tenants to work together. “The conclusion of our report is that we have to do it together. Collaboration between private and public spheres provides the strength to ultimately achieve the desired results and to expand the experience further into the RCD. The experience gained can be used in the redevelopment of the plinth in, for example, the Delftse Poort building,” Van Tuyl continues by giving an example. “For instance, by highlighting the covered arcade, which hides the facades in the Weenahuis, you not only get more rentable square meters, but you can also immediately work on that undefined entrance to Holiday Inn Express Rotterdam. In the corner behind the three statues, between the two buildings, you could house a simple coffee shop for hotel guests and people walking by. It would then become a ‘stand’ with a view of the statues and the central spot, the greened Hofplein. An important precondition for the project’s success is therefore to make the two plinth rows attractive, additionally working on creating a pleasant space. To invest in active area management in order to further develop the innovation district RCD. ”

Alderman for outdoor space and living in the RCD Bert Wijbenga (see page xx) recently presented the plan to tackle the Hofplein and its iconic fountain. In the first sketches you can see trees and grassy areas where cars are now rustling racing around. Wijbenga offers the explanation: “This will make it a place for residents, tourists and workers to meet for a stroll or a good conversation. Comfortable wide sidewalks will be built along the facades of the surrounding buildings, which will make the route to and from the city center more pleasant.”


Willem de Kooning is regarded by many as an American artist. Yet he comes from Rotterdam. He was born there on April 24, 1904 and at the age of 12 went to work at the decoration studio / painting company Gidding. In the evenings he visited the Rotterdam Academy for Visual Arts and Technical Sciences. At the age of 16 he started working as an interior designer at the famous Amsterdam department store Metz. In 1926 he departed for New York city as a stowaway; he died there on March 19, 1997. He has left us his valuable work which granted him worldwide fame.

The three sculptures in Rotterdam were made in the period between 1969 and 1970: Seated Woman, Reclining Figure and Standing Figure. De Kooning regarded the sculptures, which he first modeled in thick clay, as three-dimensional paintings. De Kooning's works are classified as abstract expressionism. According to Sculpture International Rotterdam, Standing Figure and Reclining Figure are loaned from The Willem De Kooning Foundation. Seated Woman is owned by the city.