Tree House: A “tree” of 140 meters next to the station 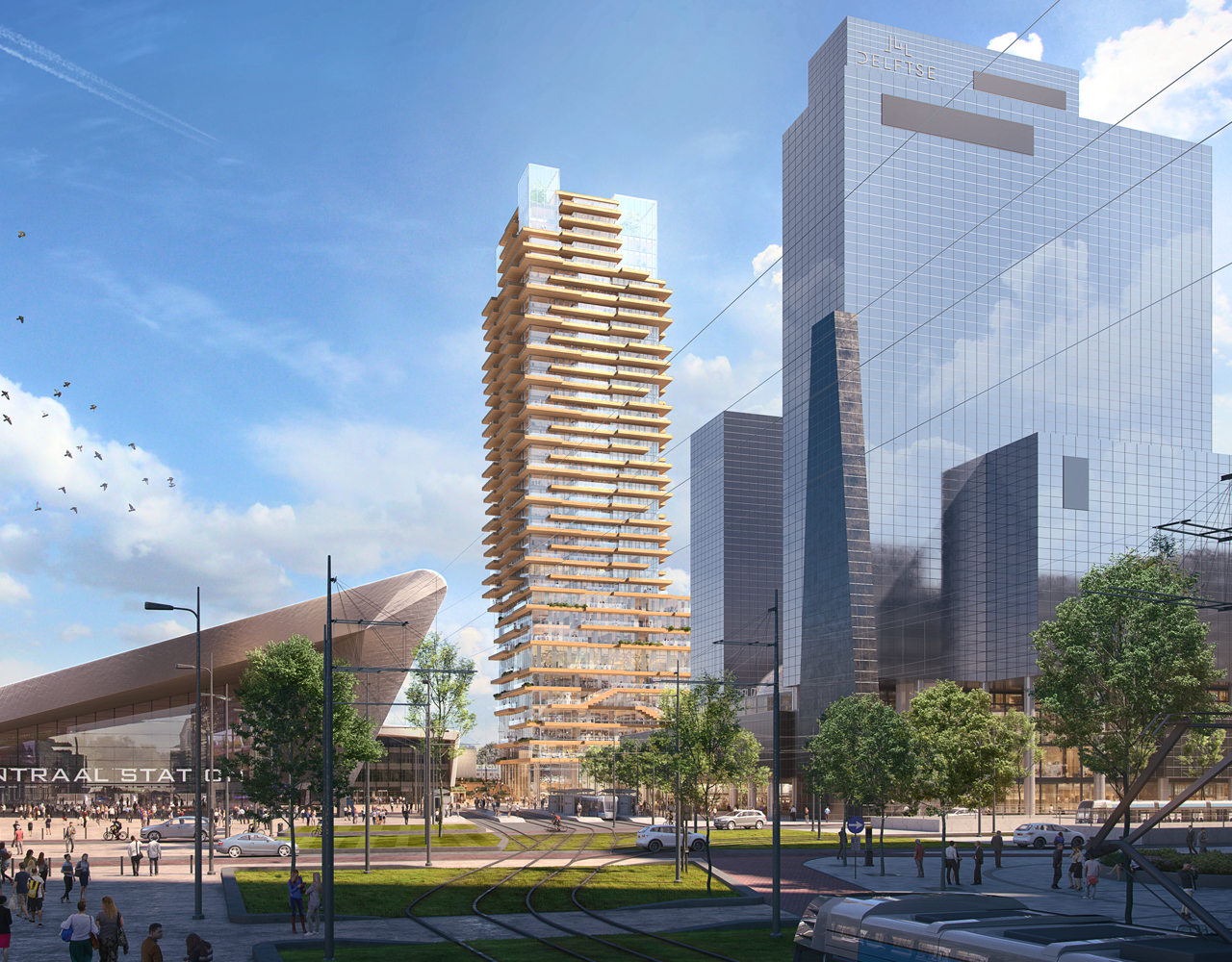 Tree House: A "tree" of 140 meters next to the station


A "tree" of 140 meters will be built between the Central Station, Delftse Poort and Central Post. The new living, working and catering complex named Tree House will be made from approximately 5,500 m3 of wood. It is striking that a vibrant innovation / culture platform will be installed at the foot of the tree to enhance liveliness at eye level.

The topic of sustainability is extremely important for the stony Rotterdam Central District (RCD). The fact that a lot of wood was intended to be used in Tree House contributed to the victory of the project at the end of 2019, after an exciting contest. Alderman Bas Kurvers (VVD) put it this way: “Tree House is a nice addition to the area. Its design adds liveliness and warmth to the RCD. Thanks to the use of wood and the varied facade image, a nice contrast is created between it and the other buildings in the area. For future residents and entrepreneurs, this location, next to the Central Station, will be the most central place in the city to live or work. ”

Tree House is inspired by the ecosystem of a tree, explains Niek Roet, a real estate developer at Provast. “From the perspective of sustainability, Tree House uses wood as a natural building material as much as possible. The building functions as CO2 storage. It also leads the avantgarde by employing circular construction and energy sector innovations. We are currently investigating how we can reuse the wood from the Luchtsingel in case it is replaced by a permanent connection between Schiekadeblok and Pompenburg / Hofbogen. The abundance of greenery contributes to biodiversity and reduces the overwhelming heat. Tree House also collects some of the rainwater from the station hall of the Central Station that flows from the roof during heavy shower rains.”


The Hague’s Provast feels more than at home in the Maasstad. The developer gained international fame with Markthal, designed by the Rotterdam architectural firm MVRDV. Roet, who lives in Amsterdam himself, describes why it is so interesting to work in Rotterdam. “It's international, enterprising and raw. It is a city with the boldness that is constantly increasing. Distinct buildings are appreciated. I consider it an honor to be able to contribute to this unique landscape with our projects.”

For Roet, the RCD is an imposing place with large masculine office buildings, where the public space lacks softness and greenery. “I am missing the strolling space and due attention to the RCD’s plinth level. Pleasant, small-scale public spaces are scarce. High-rises are only really successful if they contribute to the increased interactivity of the street life. Tree House is optimally accessible to the public. The public space outside the building extends in a peculiar way into and even onto the building. The wood and the parceling of the Central Station ceiling are reflected in the facade and the stairs of Tree House. Everyone is invited to make use of the spectacular terraces, stairs and the intimate "pocket park". I hope that Tree House will become a place that the Rotterdammer is proud of and is happy to visit. ”


Tree House offers a varied range of approximately 275 owner-occupied and rental spaces, 30 percent of which are in the mid-rental segment. In the plinth (read box) and on the seventh floor, Rotterdam hospitality entrepreneurs provide inner-city liveliness.

The office program of approximately 15,000 m2, together with co-working operator The Next Web (TNW), focuses on innovative tech companies and helps them to grow by providing the suitable community, events and facilities. Roet: “TNW has built an unparalleled community of fast-growing technology companies, business partners, investors and tech talents. In this innovative and entrepreneurial environment, start-ups and scale-ups can grow quickly. Applied Sciences strengthens the innovation ecosystem of the RCD and adds value to the current economic profile of business services.”


The municipality wanted a building that enriches the Rotterdam skyline and optimally strengthens the plinth of the RCD for Delftseplein. Niek Roet, a real estate developer at Provast: “PLP Architecture and Zones Urbaines Sensibles - ZUS, office located in the RCD, are the ideal combination of internationally renowned architects, experienced in spectacular high-rise buildings, and a Rotterdam architect with the knowledge of the place. For every Provast project we look for partners with whom we can best complete the assignment. For Tree House this has resulted in a diverse and tightly knit team including many Rotterdam entrepreneurs, in addition to ZUS involving De Dépendance, BRAND The Urban Agency and Groos. ”

According to Roet, this contributed to the design well-anchored in local knowledge striking the right chord. “The Tree House tower is at an appropriate distance from the Central Station. The station building thus retains its autonomous strength. Moreover, this allows for the creation of space on both sides of Tree House for two valuable public places that will be given back to the city: the Stadstribune on the west side and the intimate "pocket park" on the east side. This also casts minimum shadow on Provenierswijk; the tower of Tree House largely overlaps with the shadow fall of Delftse Poort. ”

At the end, Roet quotes a well-known quote from the American / Canadian urban activist Jane Jacobs: "Cities have the capability of providing something for everybody, only because, and only when, they are created by everybody."


"When I walk through the RCD, I have a kind of a hotbed feeling"


Tree House will give Rotterdam a new flat-floor theater for approximately 350 visitors. There is a need for such a "middle room" in the Maasstad. The programming will take place within the Rotterdam innovation and culture platform De Dépendance. The new hall will be a meeting point with socially relevant programming at the overlap of science, politics and society.

Thijs Barendse, director of De Dépendance founded in 2009, does not have to think long about speaker he wants to open the new space. Shoshana Zuboff, he says. The American writer and professor at Harvard has a compelling vision of contemporary capitalism and technology (she wrote the bestseller The Age of Surveillance Capitalism: The Fight for a Human Future at the New Frontier of Power / ed.). Sometimes it takes years to bring these kinds of greats to Rotterdam. The difference with other debate platforms such as "Pakhuis de Zwijger" in Amsterdam is that we only program events on the major urban issues of our time in English, always from an international perspective."

The Provast team won the competition for Delftseplein not only because of wood, lively facade, and sustainability, but also because of the base-level with catering and the thought-out space planning. Barendse: “It is thanks to Zones Urbaines Sensibles - ZUS. They planned out the ground and first floor to include catering, a city stage and De Dépendance. ZUS asked us to participate in the development phase of the building. It contributes to a more blended and vibrant environment. ”

For De Dépendance, the RCD is just the place to be, says Barendse, instead of, for example, the future Merwe-Vierhaven area (M4H) with well-known hangout spots like Keilecafe and developers such as Daan Roosegaarde and Joep van Lieshout of Atelier Van Lieshout. “The RCD is full of job-starters, expats who work at OMA, Coolblue or CIC. RCD is a highly international innovation quarter that is also easily accessible for the public and speakers from outside the city. When I walk through it, I have a kind of a hotbed feeling. There is a need for a place to gather and listen to an interesting debate. In addition to our own core programming for the audience, the hall also offers space for other activities: from congresses to s and from film evenings to fashion shows or dinners.”