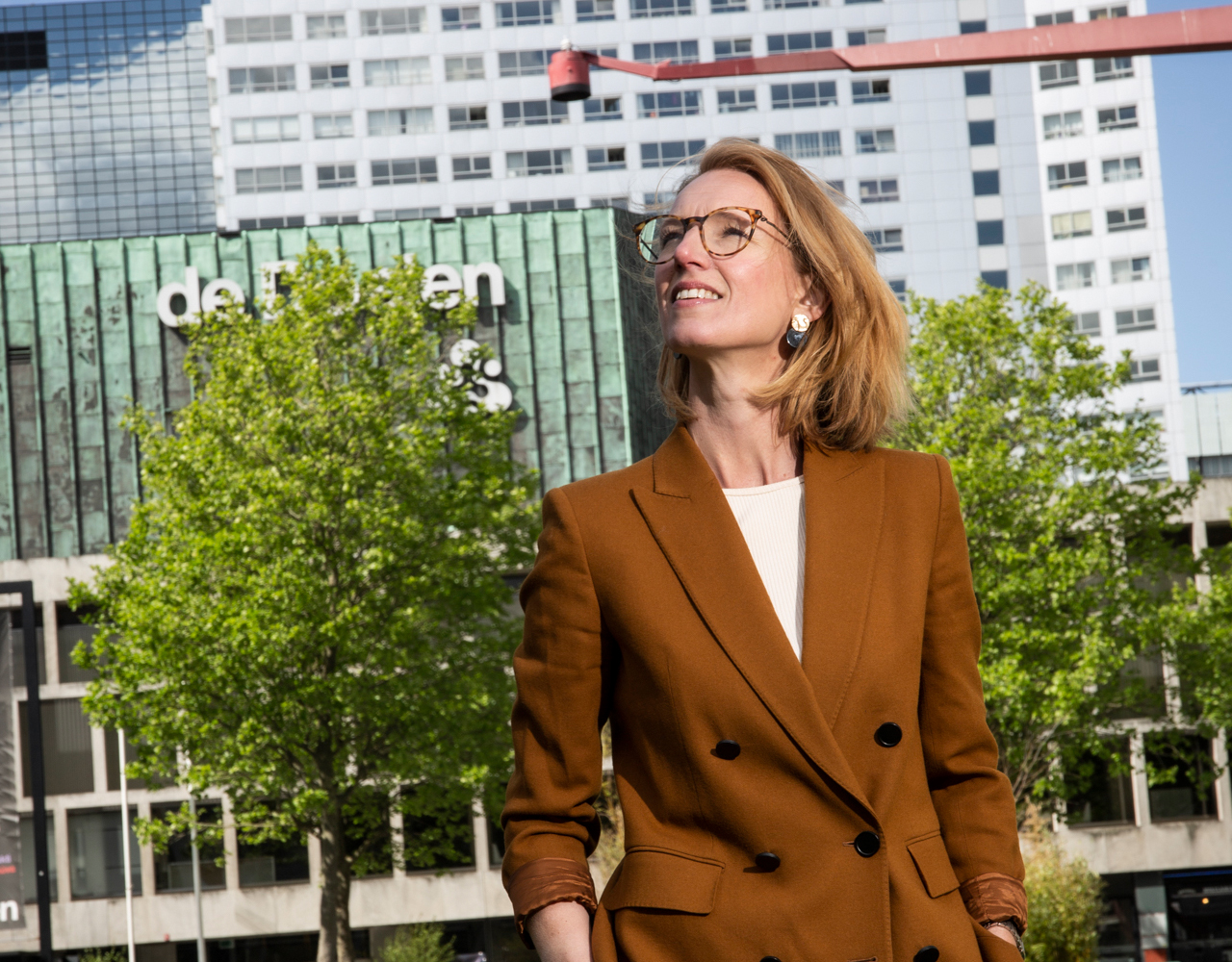 
The Schouwburgplein is the cultural heart of Rotterdam. There are concert and theater halls in that square. The plan is to make the square and its surrounding buildings thoroughly sustainable, and the outdoor space – "cozier". Ultimately, it must become the greenest cultural square in the Netherlands.

At the bend of the River Thames in the heart of London, Hungerford Bridge and Golden Jubilee Bridges intersect Southbank Center. The river flows dully along the south bank on which this great cultural building complex is located. It consists of six different leading cultural institutions surrounded by broadwalks to stroll on and listen to (street) artists. Janneke Staarink, director of de Doelen, looks at Southbank Center with some jealousy. “In addition to housing the institutions, Southbank Center takes care of the milieu. They choose restaurants suiting the area to place at the plinths. Some of the money made there goes back to Southbank Center because of the shows programmed here. It upholds a lively cultural environment. ”

Janneke Staarink tells the history on the first floor of the De Doelen conference and concert hall. Opened in 1966, the national monument is the "home" of one of the most important orchestras in the Netherlands, the Rotterdam Philharmonic Orchestra. She overlooks the Schouwburgplein and sees her colleagues from Pathé, the Schouwburg and International Film Festival Rotterdam instantly. The colored artificial turf field of the Flying Grass Carpet, with bamboo trays and seating elements on top, gives extra color to everything at the slightly raised square designed by Adriaan Geuze van West 8 in 1996. The setting sun throws long silhouettes across the marble floor. Drumming sounds from the main hall seep softly into the vestibule. She talks with passion about the fact that the square and the surrounding cultural institutions - “and that includes Codarts (conservatory)” - must merge like the Southbank Center and take responsibility for the area surrounding it. She wants all plinths and the Schouwburgplein to contribute to culture. “It's not about going to De Doelen and then back home. The intention is that you stay in the area and that a concert in the Doelen is just one facet of that.”

The deep wish of De Doelen director is to really connect it to the square in front of the door to De Doelen. Now there is another street running through it, making it a dangerous place on busy Friday evenings. “The square really has to become a bridge between Schouwburg, surrounding catering establishments, Pathé and new cultural entrepreneurs in the plinths and the of the through road for cars will not fit in this project. The goal is to create a lively square and the environment with good vibes, where you can meet people. ”


It is not only the milieu that Janneke Staarink is working on. To the great satisfaction of Jeroen de Leeuw, the roof of the Doelen is being worked on to make it more sustainable. “It will be a so-called green-blue roof - polder roof - in which rainwater will be retained like in a sponge,” says Staarink, then going one step further. “The enormous green roof must also contribute to the square as an extra layer. We have to break out of the halls and start programming events on our roof so that the Coolblue employee, who works around the corner, can come to listen to music on the roof during the break. I also want it to facilitate coincidental encounters.”


Jeroen de Leeuw radiates the same energy as Staarink when he talks about the square of Rotterdam, the Schouwburgplein. De Leeuw is the driving force behind the transformation of the Schouwburgplein and the sustainability initiatives concerning surrounding buildings. De Doelen is just one of them. If it were up to him, the square and the rest of the nearby constructions would have been climate adaptive and CO2 neutral by 2030.

The sustainability project has been given the intriguing name 7 Square Endeavor (7SE). 7SE originated as a bottom-up initiative of Theater Rotterdam and De Doelen, and has since developed into a public-private partnership between the area’s parties, public institutions and knowledge / market parties. Smart and innovative use of energy is one of the spearheads of the project, says De Leeuw. "We work according to the principles of Trias Energetica: limiting energy consumption by insulating, making good use of sustainably generated energy and, if necessary, dealing with the use of fossil fuels as efficiently as possible."

If you now walk through the area, you will see that the first flats are already being worked on. Contractors are insulating facades and installing double glazing, and the old-fashioned lighting is replaced by LED lighting. De Leeuw: “The second step in the Trias Energetica is the construction of a heat and cold storage system (ATES). Cold and heat are stored in the soil. Energy costs for cooling and heating are lower. Homes, offices, and halls can then be disconnected from the district heating. This heat comes mainly from two gas-fired power plants and waste processor AVR, so it is not CO2 neutral. ”


The farmer may like a heavy rain shower, but no one in the stony Schouwburgplein area does. Sewers overflow and many cellars are full of water after such a heavy rain. The area can hardly be called climate adaptive. A part of 7 Square Endeavor is therefore to buffer rainwater during the periods of water surplus (during heavy showers) and shortages (during periods of severe drought). De Doelen will do this with a green-blue roof. De Leeuw: “Such polder roofs first absorb the rainwater and only then let it run into the sewer. Part of the plan is to construct underground water buffers approximately 20 meters deep. There we can store the excess rainwater to use for the drought periods, and in the event of a heavy downpour you can avoid having the clean rainwater overflow and spill on the surface of Westersingel. The water can later be used by pumping it up to the green polder roof, saturating it, so that the roof is kept cool. Tackling heat stress (urban heat island effect / ed.) is certainly just as important in the endeavor of making the area more livable during the periods of heat."


Alderman for outdoor space Bert Wijbenga across the Schouwburgplein


Rotterdam will invest 233 million euros in seven city projects in the coming years. These projects tackle climate adaptation, recreation, culture, urban economy, mobility and housing . This investment in public space will eventually lead to more commercial investments. Two of the Big Seven areas are located on the edge of the Rotterdam Central District: Schouwburgplein and Hofplein

Janneke Staarink of De Doelen has been attentively listened to when talking about the approach to the Schouwburgplein. The square will be fully car-free from De Doelen to the Schouwburg, from the restaurants on Karel Doormanstraat to the restaurants in the Hartsuykerflat. Alderman for outdoor space Bert Wijbenga: “The Schouwburgplein will become an extension of the indoor stages. We would like the cultural institutions of the square to be able to program cultural events on the square. To achieve this, a new floor will be created on the roof of the parking garage, more greenery will be cultivated, and work will be done on the streets around the square. There will also be a large underground bicycle garage and a water storage system. The new design and the materials employed will be coordinated, inviting you to stay and facilitating cultural events.”